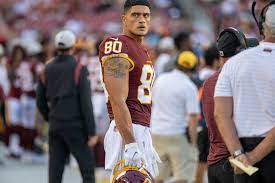 Lead-in: What qualities do you think you need to be successful in the NFL? How difficult would it be for a basketball player to make it?

Lead-in: look at the pictures in the article what doyou think it might mention: https://www.espn.com/nfl/story/_/id/31828911/from-chile-nfl-sammis-reyes-prepares-new-challenge-washington

Read the article: What has Sammis Reyes achieved? What obstacles has he faced?

From Chile to the NFL: Sammis Reyes’ past prepares him for new challenges with Washington

ASHBURN, Va. — When you have moved by yourself to a foreign country at age 14 with NBA dreams, learning the language informally after the school you were attending shut down and surviving on day-old donuts for two or three days and $50 a month from your parents, learning a new sport at age 25 doesn’t seem so scary.

Washington signed Reyes to a three-year deal in April after watching him work out at Florida’s pro day. Washington’s coaches acknowledge there’s a lot of work ahead to get him ready for the NFL. But they like his size (6-foot-7, 240 pounds). Reyes had been training at IMG Academy in Florida as part of the NFL’s International Pathway Program. They know he’s a work in progress.

He left his home in Santiago, Chile at 14 to play high school basketball in Florida. He played three years of Division I basketball — two at Tulane, but in 32 games there from 2016-17 he averaged 0.8 points per game. He spent one season at Loyola of New Orleans, where he played occasionally. But reaching the level of an NFL team qualifies as a win. Reyes’s past — traveling a road filled with obstacles — has helped prepare him for the difficult task awaiting him in training camp.

«No one is prepared at 14 to leave home,» he said. «My story ended up being a good one, I was able to figure it out, but there [were] many times it would have been very easy for me to go a different route.»

To learn English, he borrowed a Blackberry, looking up words in the dictionary and writing them down. He filled notebooks with trickier ones, like “cucumber.” He watched The Matrix and other films with the subtitles turned on, pausing after each scene to translate. He did the same thing with rap lyrics, pulling up YouTube, using the subtitles, until he could recite every Wu-Tang lyric. It sucked, the grumbling stomach, the prospect perpetually in search of a home. Reyes even slept on a park bench one night, when he had flown back from Chile and no one knew he was coming in, so nobody picked him up.

After hearing so many times from coaches in multiple sports  that he should play football, Sammis gave it a shot. He practiced with the North Broward team during the spring of his junior year.

In one workout, with coaches from different cities in attendance, Sammis was playing defensive end. North Broward coach Roland Nottage said that Sammis made a play as by running to make a tackle «he was never taught to do … he did things on natural instincts.» He recalled the college coaches high-fiving one another.

«Where I’m from, there aren’t many opportunities,» Sammis said. «There’s a lot of drugs, a lot of violence, a lot of things I don’t want to be around. If I had stayed in Chile, maybe I’m around those things a lot more. I came here and played sports. Very different life.»

Details: Are the following true or false, according to the article?

Match the words in bold with these definitions:

Use these words to complete these sentences:

Discussion: Ask and answer the questions

Part 2: Video. What do you think Sammis Reyes’s English is like?

Watch this video and find out.

Match the two halves of the sentences:

Discussion. What team are you a fan of? What do you think of their name? (does it have any connotations? How is the team going?