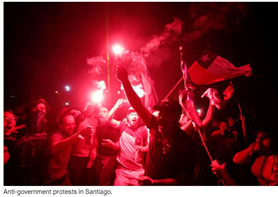 What do you know about the Sebastian Piñera and the Pandora papers?

Listen to the audio and find out.

Look at the graphs and photos from the article. What story are they telling about Chile?

Choose a section of the article:

Read it and take notes. Compare your section with your classmates.

Discussion: What picture does this article paint of Chile? Do you think it is reasonable?