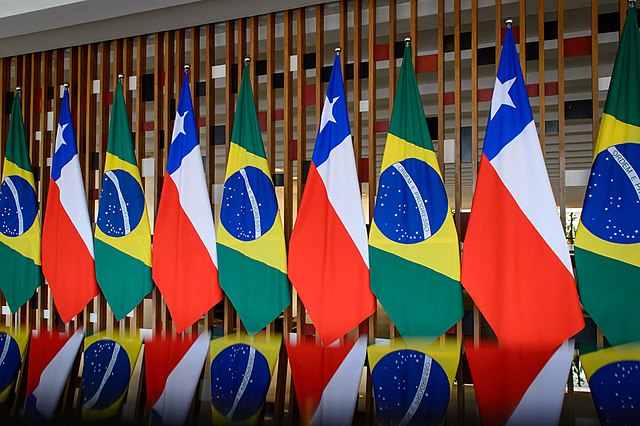 Lead in: What were the highlights and lowlights of the Brazil-Chile match?

Watch this video. Were they the same as those you discussed?

Match these actions with the players:

use these words to complete the sentences: penalty area, bench, chance, save, red card, offside, lead

Sierralta. Can’t find Isla. And gives the opportunity for Richarlison to break away. The Watford defender getting back to try and stop Richarlison when he comes inside. Richarlison takes the shot on, bobbles in front of Bravo but it’s an easy save in the end. Just a little warning there for Francisco Sierralta who gave the ball away cheaply. But again, Chile looked to come straight back the other way. Positive stuff there. Alexis Sanchez flicks this one over the top for Vargas, who’s chasing. Vargas gets there, clips it over the top of Edison, just wide of the post. Well it’s gonna be called back for an offside anyway. The flag coming very late.

You’d certainly put these two as fairly evenly matched so far. Here’s Neymar from the edge of the box, it’s a good ball in, and it’s a good chance. Clipped to the back post for Roberto Firmino, who just couldn’t quite apply that finishing touch. The best chance of the game so far after 22 minutes, and no surprise to see Neymar at the center of it and Roberto Firmino just couldn’t quite get the touch he wanted on the volley at the back post. He wasn’t far away from getting his head on there.

It’s a good ball forward into Neymar. Neymar tries to thread one through for Gabriel Jesus. He finds him. Gabriel Jesus strikes it. It’s a good save from Claudio Bravo. Tipped over the crossbar from the veteran goalkeeper, who hasn’t had much to do in this half.

Isla, stays with him. Instead the ball’s thread into Fred. Flicked on the edge from Casimiro. Really intricate stuff. Lucas Paquetá could be in behind here and Lucas Paquetá with the instant impact off the bench, gives Brazil the lead one minute into the second half and we have our breakthrough. An inspired substitution, with a minute on the pitch, keeps his cool, shrugs off Gary Medel and fires it low past Claudio Bravo.

A really heavy challenge there and it’s a red card. Gabriel Jesus sent off, just minutes after Brazil lead, and if there was a lack of drama in the first 45 minutes, then stay right where you are with thisone.

Just trying to find a way into the Brazilian penalty area, now they go from right to left, Mena crosses, Brereton Diaz flicks it on. It’s looping, it’s off the crossbar, off the crossbar, Chile are knocking. Well this was just moments ago, a looping header from Ben Brereton Diaz I don’t think Edison would have got there. He was scrambling because it just dropped onto his crossbar.

How would you analyse the team’s performance in this game? In the Copa America?

Read this article to find out what happened with Chile and Bolivia.:

Use the language to write a summary of the Brazil/Chile game. Compare it to the article below: