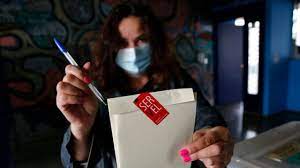 Are these true or false?

Language (Match the following halves of the sentences)

What verbs from the above are in the passive voice? What tense are they in?

Discussion: What do you think are the strengths and weaknesses of this process?

2. What were the results of this election? Watch this video and find out:

What is the answer to the following questions?

Complete these sentences with these words:

framework, looks, about, important, being

Discussion: What do you think of the assembly constituents? Do you think they will be able to create a good constitution?

What does Jorge Heine say about the following topics?

Discussion: To what extent do you agree with this analysis?