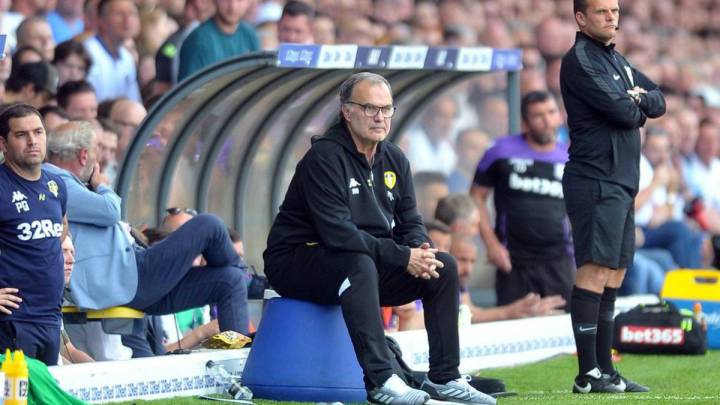 What do you know about Marcelo Bielsa? His personality? His tactics? Why do you think he is successful/ not successful as a coach?

Watch this video. What does the journalist say about Bielsa?

Relate the following things to their description.

Match the following three headlines with moments in Bielsa’s time at Leeds:

Bielsa was appointed as Leeds boss on 15 June, 2018 but fans and media alike had to wait another 10 days to hear from the Argentine. The appointment was seen as a major coup by many. After all, this was a man who was revered by Manchester City boss Pep Guardiola and former Tottenham manager Mauricio Pochettino. Flanked, as ever, by an interpreter, Bielsa sat down after a big introduction from owner Andrea Radrizzani. It was, as we have all become used to now, not brief. In just shy of an hour and a half he covered topics as varied as why Leeds had failed last season, the fact that he had watched all 51 of their games from the previous campaign – including the two post-season games in Myanmar, whether players would be required to sleep at the training ground, who he preferred out of former Leeds bosses Don Revie and Brian Clough, and how he got the nickname El Loco (the crazy one). Although he stopped short of saying promotion was the aim in his first year he admitted «it would be impossible not to be dreaming about that happening». For Leeds fans who had been dreaming since they were relegated from the Premier League in 2004, it looked like they might now have someone who could make it a reality.

Hours before their home win over the Rams on 11 January it came to light that a member of Leeds staff had been found watching Derby train from a public footpath. Bielsa admitted he had sent the person to do it at the time, Lampard called it «unethical» and the Football Association started an investigation. Five days later the Argentine called an unscheduled news conference at the club’s Thorp Arch training ground. Rumours began to circulate that he was going to resign over the incident. Instead Bielsa admitted that he had sent someone to watch all of their Championship opponents train and then detailed, at great length, the amount of analysis he and his team did on each team they faced. Using a computer presentation and with dossiers stacked up in front of the screen, Bielsa said that analysis of each of their opponents’ previous matches took four hours per game. He showed Leeds had information on the percentage of games in which Derby used certain formations, which players were used in which positions and formations they had struggled against this season. I feel ashamed to show you this,» he said. Leeds were ultimately fined £200,000 by the FA. Bielsa paid it himself.

It’s difficult to single out one signing from Bielsa’s time in charge of the club. Despite his critics, Bamford has ultimately scored the goals that have helped them win promotion, Manchester City loanee Jack Harrison has enjoyed a superb season and 20-year-old French goalkeeper Illan Meslier has belied his age with some excellent displays after Casilla was banned after being found guilty of racially abusing Charlton’s Jonathan Leko. However, there is one signing that perhaps best encapsulates Bielsa’s ethic. There was little fanfare when Ben White joined on loan from Brighton and the departure of popular centre-back Pontus Jansson to Brentford the following week only served to cause greater consternation among the Leeds fanbase. They needn’t have worried. White has been absolutely superb at the back for Leeds this season and his excellent ability with the ball at his feet has even seen him deputise in midfield to cover for injuries or suspensions. The 22-year-old’s skills have been crucial to allowing the Whites to play the way Bielsa wants and they will be desperate to try and keep him on at Elland Road next season.

Video: Why would a team let another one score a goal? Watch the video and find out.

What does this event tell you about Bielsa’s character?

Letter: read the following words from Bielsa. Do you think this is a good philosophy for life?

The moments in my life when I have improved are closely related to failure; the moments in my life when I have regressed are closely related to success. Being successful deforms us as human beings, it relaxes us, it plays tricks on us, it makes us worse individuals, it helps us fall in love with ourselves. Failure is the complete opposite, it forms us, it makes us more solid, it brings us closer to our convictions, it makes us more coherent. I was happy when I enjoyed amateur football, I was happy when I matured as I was in love with my job. I have a deep love for football, for the game, for the corner kick, for the narrow space, for the long line on the pitch, for the football itself. I despise everything that comes after those concepts. In order to explain this a little bit better, I know that joy after winning only lasts 5 minutes, then there is a huge void and a loneliness that is hard to describe. Never allow failure to deteriorate your self-esteem. When you win, the admiration messages you get can be confusing. They stimulate self-love and that can always deform you. When you lose, the exact opposite happens. What matters is being noble with all the resources you use.