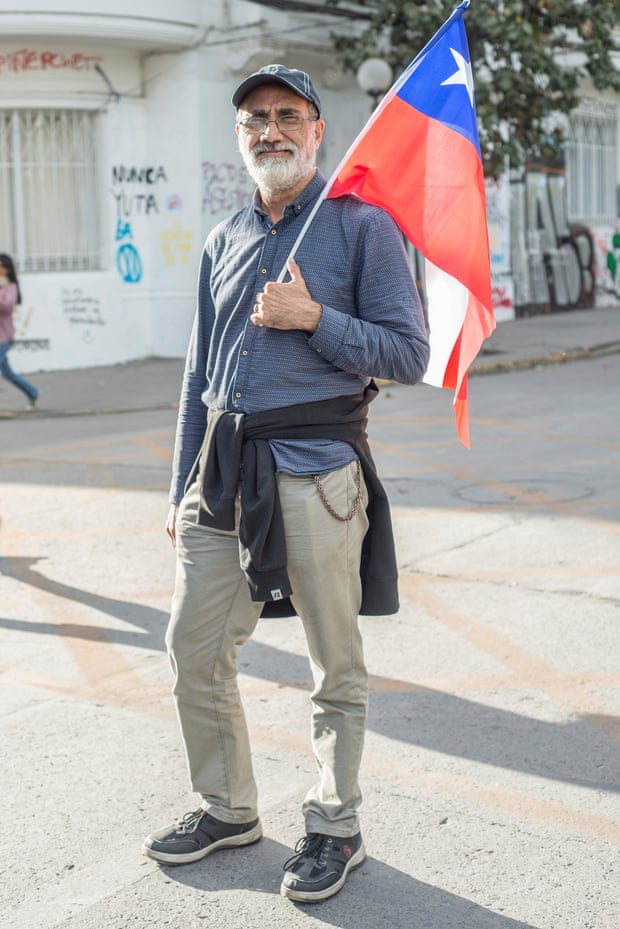 1.Why are people protesting? What are the different reasons.

3. Watch the video again. Are the following true or false?

4. Watch the video again. What questions does the interviewer ask?

2. Match them with the following professions, ages:

4. Read the following article. to find out.

“This is a small country, we have natural resources. This could be a prosperous country if our riches were better distributed. We could be marvelous. A country that is prosperous and happy and in peace. “I’m not afraid. I have nothing to lose. I’m doing this for my granddaughter who is six months old.”

Melissa Medina, 25, makeup artist
“My grandmother fought against the dictatorship; my mother fought in her time; I am the mother of a six-year-old girl and now it’s my turn to protest. “We want long-term changes that I hope she will enjoy in 20 years. “We have shitty wages and 12-hour shifts. It takes me two hours to get back from work, and when I get home I don’t see my daughter because she is asleep.
“Marching with us, there are children, students, workers, parents, aunts, grandmothers. Grandmothers screaming for change! At their age and still fighting. “Look at us: we carry spoons and pots and pans [to rattle in protest]. We have water and baking soda to combat the effects of teargas. “And they have buckshot, teargas, lockups, police brutality, rapes, tortures – so who is still winning and who is still losing? The fight must go on. “Maybe nothing positive will come out of this, and we will win nothing. But I don’t want to wait until I’m 50 and realize I wasn’t brave enough. I screamed and I fought. I ran from the police, I got shot in the leg. Next, it’s going to be my daughter’s turn. I hope she doesn’t have to fight.”

“The people are tired of being treated like slaves or criminals. If you don’t have an important last name or don’t have money you are nothing. “The first demand is to change the constitution: we are the only country in Latin America that has the same constitution it had under a dictatorship. We have the same laws and the same economic model brought in by the dictatorship. And we are seeing that they still violate human rights like they did under the dictatorship. “It is incredible how they think we are stupid. But people woke up and are showing the government that we are not stupid: they won’t be sticking their finger down our throats ever again.”

Germán David Requena Zeta, 18, student
“As a student it’s very expensive to live here in Santiago. My parents and I are from northern Chile, so I live here alone. “I am fighting for a better education that costs less, a subway fare that is fair, and a life with more dignity. Because what we earn now is not enough to survive on. I want to become [economically] independent but I can’t – life it is just too expensive. I want to be a student, to live in peace – these are little things.“I am not afraid of the police– even though many people have been wounded, and others have been killed. I just don’t understand why they attack us with so much force.”

“The people who run the government are the same people who have economic power, it is a perfect circle: they pass laws to make more money, and the rest of us become poorer. “During the protests the government has killed people, women have been raped, men have been raped. Many have lost eyes while they protested peacefully. “Human rights have not been truly respected since the dictatorship. We are subjugated by the rich –and now it is time for that to end. It’s time for the people to have a kind of life that makes them want to live. “People live with a lot of stress: they’re in debt to the banks and businesses – and then spend that money in the same businesses in order to live.”

Cristian Quiroga, 43, television camera assistant
“I want the government and big business to stop looting my country – to stop taking what belongs to all of us and selling it to the highest bidder. “They make deals made for the copper, the water, the lithium, the ocean – everything is up for sale and flogged off for a pittance to other countries. And none of the cash comes down to us. “The Chilean people have changed their way of thinking because of social media and the internet. Chile has changed; the people are more liberal. But labor laws and our education system have not changed in 30 years. If we do get a new constitution? I’ll go out with my broom and my rags, and I’ll help clean the streets and repaint the country.”

“I came out to represent trans people. The average life expectancy of a trans person in Chile is 35, and demands that many are fighting for – like a decent pension – we can’t even dream of that. We are protesting because without a sexual revolution there is no social revolution. “My goal is to see Piñera and his ministers in prison for all that they have done – and that there is a law protecting trans and non-binary people. “I never imagined the protests would reach this size. Things were bad: people were dying; trans people were dying; the [indigenous] Mapuches were dying – and in the end the people woke up and realized this was wrong. “In a democracy, the people have the power. And the government has to listen to us.”

6. Do you agree? Disagree? What are the most important reasons for you?

7. Find the words in italics that mean the same as:

Watch the following video. How does the president make sense of the situation? What does he want to do as a response to the citizens’ demands?

Match the two sides of the sentences.

Do you agree with the president’s assessment of the problem?