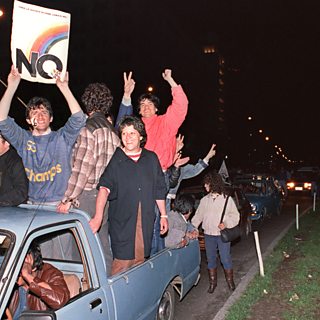 What do you remember about the 1988 vote? Why was it so important? What did people expect to happen? What were the dangers?

What did the recording say about the following?

Match the people with their descriptions

Use these verbs to complete the sentences: set in, yearning, spelt, scheduled, lost, drove, go down, fared

When the referendum was announced, I was very sceptical.
Something was about to happen, but no what Eugenio had feared.
They were convinced that there was no way they could lose this vote.
They even agreed to give the opposition acess to the airways, 15 minutes each day.
I thought I knew better.
We were frightened that something could happen.
No one knew how the government would react.
Eugenio eventually won over the doubters.
Nothing he could do in the future would compare with that feeling of success.
Our biggest fear was whether the results would be recognised.
Eugenio got up early on voting day.

What big historical events do you remember in your life? What difference have they made in your life/ the life of your country?

Find a historical episode you are interested in here, listen to it and report back to the class.